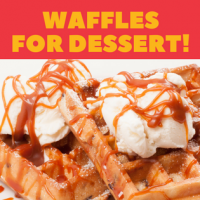 For most of us, certain foods and beverages are inextricably tied to a certain time of the day: a bowl of cereal, cheeseburger, Chinese stir fry. But who made those decisions? Why isn’t fettuccine alfredo next to the Denver omelet on the breakfast menu?

Many of our traditions come from centuries of cultural practice, but others were forced on us with less honorable intentions. I just read that bacon only became a traditional breakfast food in the 1920s when the Beech-Nut Packing Company – producer of pork products along with its trademark gum – hired the infamous advertising guru Edward Bernays. Bernays conducted a “study” of doctors who proclaimed that Americans needed a heavier breakfast in their diet, and the media shared the health benefits of starting the day with “Bacon and Eggs.” Beech-Nut profits soared, and a new tradition was born.

I love tradition as much as the next guy, but I also like changing it up and trying out new combinations. (Breakfast for dinner is always a big hit in my house.) Chicken and waffles is one example of an unlikely pairing that’s now an American icon, but waffles go way beyond just that one entree.

Of course, a sweet treat like waffles isn’t an odd choice for dessert, but I feel like their potential hasn’t yet been fully explored. Bubble waffles are starting to make a name for themselves, but even the standard waffle from your baker can be used in so many ways for a decadent after-dinner indulgence.

The French knew this, even as far back as the 17th century. In the “Dictionnaire historique des institutions: mœurs et coutumes de la France,” waffles (known as mestiers), were described as “…smaller, thinner and above all more delicate, being composed of egg yolks, sugar, and the finest of the finest flour, mixed in white wine. One serves them at the table like dessert pastry.”

Who am I to argue with that?

Reach for a new recipe 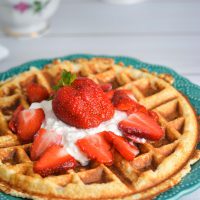 The possibilities are endless, of course, and many of our restaurant and hotel partners are creating some really innovative and delicious menu items for their guests.

Dessert is also a great place to infuse a little alcohol, and this bananas foster waffle recipe is a perfect match with a cup of coffee after a late-night meal. 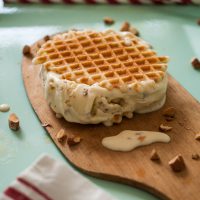 And don’t forget about the always-popular ice cream sandwich; this one is classed up with dulce de leche, which literally means “candy of milk.” F for Food posted this delicious recipe that combines the muted sweetness of the dulce de leche with chilly ice cream, sandwiched with two crispy waffles—perfect for a summer dessert. I’m ready to try this one with our cinnamon mix, with maybe some chopped toasted almonds mixed in for good measure.

Waffles not only open a new realm of menu options for your guests, but they make a profitable addition to your dessert platter. You’re really limited only by your imagination! And while waffles may seem like purely a breakfast food, they make a delicious choice for every meal of the day.