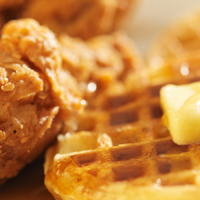 When you hear the word “waffle,” what comes to mind? Breakfast? Syrup? Eggs and bacon?

It’s true. Waffles are usually reserved for a sweet morning treat and rarely make an appearance after brunch. But these morning treats can also make for a delicious meal to be enjoyed at all hours of the day.

One of the most successful combinations? Chicken and waffles. Here’s the inside scoop on what Dan Myers, senior food editor for The Daily Meal, calls “a warm blanket for the soul.”

Whether you order it at a classic diner or make them at home, the components of chicken and waffles are pretty straightforward:


The History of Chicken and Waffles

Unlike other soul-food classics that originated in the deep south – such as collard greens, chicken fried steak, or any kind of cobbler – chicken and waffles actually has its roots in the urban north.

The modern dish we know as chicken and waffles originated from the Wells Supper Club, a restaurant that opened in Harlem, New York, in 1938. Known just as “Wells” to the locals, it was a gathering place for jazz legends like Sammy Davis Jr. and Nat King Cole, who’d frequent the place after a night of performing. Too late for dinner but a bit early for breakfast, the ingenious kitchen staff made this delicious compromise. The dish became so popular, the idea spread across the country, and now entire restaurants are dedicated to the fare, such as Roscoe’s House of Chicken and Waffles, based in the Los Angeles area.

Take a look at some of these creative twists on a classic recipe:

Amanda Freitag from the Food Network show, “American Diner Revival,” brings a devilishly sweet combination of spices into the mix with this recipe:

Blogger Agnes Hsu offers a kid-friendly option by making the meal vertical. Simply cut the chicken and waffles into bite size pieces and put it on a skewer:

In this savory sandwich version from Jonathan Melendez (The Candid Appetite), the waffle (made with black pepper in the mix) serves as the bread, and the chicken is drizzled with maple Dijon sauce and topped with tomatoes and avocado.

If you haven’t tried this soul-food classic yet, I encourage you to expand your waffle horizons!